The Future Merton team at Merton Council has announced that it has been awarded £54.5 million from the GLA to help towards funding the Morden Regeneration scheme and so it is looking to procure a development partner in 2020/21. Yes, this may seem like déjà vu and so forgive me if I don’t get too excited by the news.

As our timeline shows, Future Merton have repeatedly announced that they are looking for a development partner, even going so far as to spend £7000 sending council Leader Stephen Alambritis to the South of France, in the height of Summer, to find one. Funding was offered once before in 2015 when Boris Johnson, the Mayor of London, made Morden a ‘London Housing Zone’ and awarded a £42million development loan to “woo” development partners.  Unfortunately, Future Merton failed to  organise itself in time and I gather the offer was withdrawn as there is no mention of it after 2017.

I don’t want to put a dampener on the work that Future Merton do. This project is hugely complex, but it does deserve to be scrutinised. Regrettably, I feel that such scrutiny has been missing from the meetings held with Future Merton and cross-party Councillors from various wards in Merton.

Meanwhile Morden is suffering from ‘informal blight’ as shopkeepers, business owners, investors, TFL and the Council itself, continue to put off investing any time or money in it and so the area outside the station becomes increasingly unwelcoming and dirty along with more anti-social behaviour. Given that no work will happen before 2023, this blight has to stop now and we need to call on the Council,  Future Merton and TFL to work with landlords and shop owners to get the place cleaned up. If they cannot   manage that, then what hope is there of them working together to completely rebuild the place?

One officer in a recent meeting described Morden as being ‘economically unsustainable’. I find this insulting and untrue. Over the last ten years while Future Merton has been making grand plans about how wonderful Morden can be, businesses and shops have continued to open and trade successfully. Love Morden (a local community group) have strived to put on some form of gathering every Christmas without any funding from the Council. Morden is, in fact, sustaining itself despite the Council’s inertia and failure to improve the area.

Many of the shops and businesses in Morden are independent and have proved to be very resilient both during and after the banking crisis. While many high streets chains are closing, Morden’s eclectic mix of Halal butchers, hardware stores and ‘traditional caffs’ continue to thrive. These businesses deserve support now. Council funding specifically to improve shop fronts, closely monitored by the Planning Department, would ensure that businesses follow the Council’s shop front guidelines to the benefit of everyone locally.  We must stress that I fully  support the plans to regenerate Morden and recognise the task that the  Future Merton team face, but  I hope that Merton Council will see that something urgently needs to be done now and not put off yet again until such time that official regeneration begins. 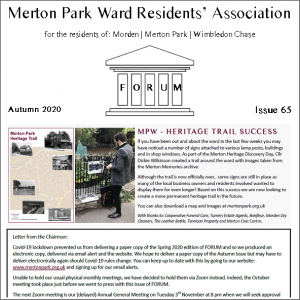